Why ask why? Well…Why is what leads to change, growth and success! 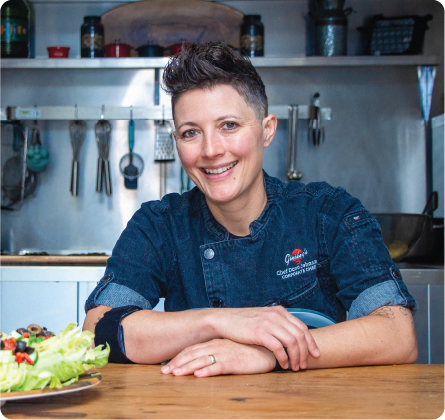 Chef Dana Johnson’s love of food and attraction to the kitchen began during childhood, raised by a mom that loved to cook and entertain. At the age of 24, Johnson was still in search of a career when a friend’s words, “Get paid to do what you love,” encouraged her to begin her culinary journey.

In 2000, Chef Dana Johnson did just that as she began a private education under Chef Larry Chu in New Paltz, NY, where she spent the next four years refining her culinary techniques while her cooking skills flourished and her style developed. At the age of 29, Johnson took the leap into ownership opening her first café, and has since owned and operated restaurants in both Columbia and Greene counties for the past 16 years.

In 2017, Johnson took a break from the everyday grind and established Chef D’s Private Chef and Consulting Company, allowing her to pursue her creativity outside of the restaurant atmosphere.

In 2021, Johnson joined the Ginsberg’s team, as our Corporate Chef, bringing her rustic culinary style that melds with global inspirations.