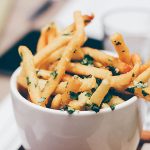 First off let’s clear up the fact that French fries did not originate in France. American soldiers stationed in Belgium were first introduced to French fries during WWI. The official language of the Belgium army was French. So soldiers nick-named the delicious fried potatoes “French Fries”. The name stuck, and decades later we’re still giving credit to the wrong country. Belgium is also home to the world’s first French fry museum and the tasty snack also has its own day, July 13th is National French Fry Day so eat up!

These deep-fried pieces of potatoes are crispy outside and tender and steamy inside making them a pile of comforting perfection. The average American eats almost 30 lbs of French Fries every year according to National Geographic.  Originally French fries are served as an accompaniment to other foods from as basic as a burger or classic Mussels and Frites or alone with something as simple as ketchup for dipping.

The best homemade fries are generally fried twice, or potatoes are soaked overnight prior to frying and don’t forget the salt. The big secret is getting that crisp texture. If you are making homemade fries. Soak them for at least 8 hours in the refrigerator. then cut and soak for another 8 hours and dry. This draws the starch out and makes them more rigid and less likely to clump together. Then fry first at 325°F and again at 375°F to get them perfectly crisp and just the right amount of browning.

The best potato hands down is the Russet potato for french fries. It’s higher in starch and lower in moisture, making it perfect for french fries. While russets are good for fries and baked potatoes, they don’t fair well when boiled. In fact, they fall apart and I wouldn’t recommend them for soups, unless you want to use them as a thickener.

Well, game on French fries! Because now we serve you as a starter or a meal loaded with all kinds of goodies. Basically, if you would serve it with fries why not smother them with it. We got busy in the Ginsberg’s Foods test kitchen and made some classics and some trendy dishes of our own.

Why Does Portion Size Matter
Why Rethink Protein Usage?